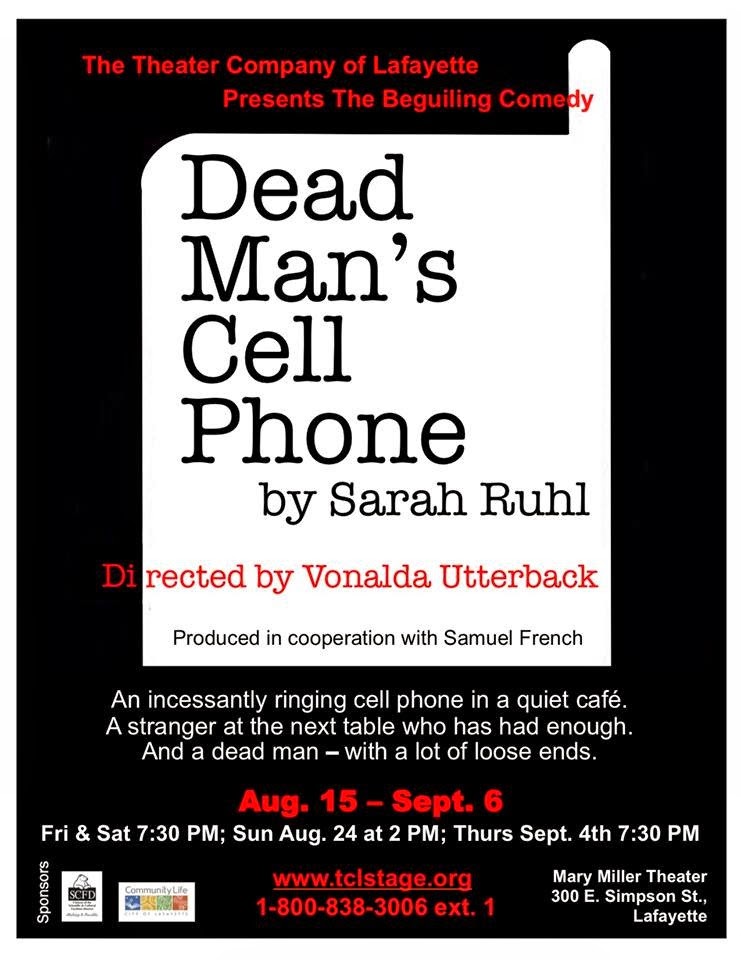 Playwright:  Sarah Ruhl
Company:  Theater Company of Lafayette
Venue:  Mary Miller Theatre, 300 E. Simpson Street, Lafayette CO, 80026.
Running Time:  2 hours (includes 10 minute intermission).
Date of Performance:  Saturday, August 23, 2014
Dead Man's Cell Phone opens in a cafe, where the daily specials are on the white board:  Lobster Bisque and lentil soup.  We see Gordon from the back, and Jean, at another table, facing us, working at some task.  They are total strangers to each other.  The silence is interrupted by Gordon's ringing cell phone.  Gordon ignores it, Jean is annoyed by it.  The ringing phone is intrusive, disruptive, and persistent.  Jean finally gets up and confronts Gordon about it.
Despite Jean's complaints about his ringing cell phone, Gordon is unresponsive.  That's because Gordon is dead, sitting straight up in his chair at the cafe.  Dead, but not forgotten; his cell phone rings incessantly.
We are all pretty much like Pavlov's dog with ringing phones...they MUST be answered.  So Jean takes Gordon's phone, and answers it.  She never met Gordon, so she can't help the caller much, other than to say he's not able to come to the phone.  So she takes a message.
Ruhl's script has Jean adopting an imaginary, if brief, relationship with Gordon, permitting her to answer Gordon's cell phone every time it rings.  Each time she answers, she pretends to know Gordon, trying to help the caller deal with Gordon's persistent unavailability.  The script has several messages for us, not the least of which deals with our technological connection to, and our technological disconnection from, other people.
It turns out that Gordon was a complicated guy; his business was not just questionable...it was illegal.  He had wife, a brother, a mother, and a mistress.  Of course, that business and those relationships made some problems for Jean nearly every time she pretended to know Gordon.  Some hilarity ensues, but the this is a comedy where the message is superior to the medium.
Theater Company of Lafayette (TCL) embraces Dead Man's Cell Phone with a great deal of enthusiasm and energy; the production is fast paced and seamless.  Director Vonalda Utterback has a team of four stage hands who quickly move numerous set pieces between scenes in a what seems like a choreographed dance.  Utterback makes great use of a small space, as well as a tiny backstage area.
This is TCL's first production using their updated, state of the art LED lighting system.  Lighting designer Brian Miller put the new lights through their paces, using minimal lighting for the scene changes, and lighting each scene appropriately for a church, a cafe, or a home.
Fight choreographer Stephanie Roscoe brings realism and some hard knocks to Jean (Erica Young) and Carlotta's (Krystal Jakosky) knock down, drag out melee.  The set design (Pam Bennett, Chris Pash) is functional and minimal.  Bennett and Pash have created a set that cleverly maximizes the limited flexibility of a stage that has some serious limitations.
It is the performances, though, that will stick with the audience.  They are uniformly serious, fun, passionate, and emotional.  Gordon (Dean Espitallier) is a dead guy with no lines whatsoever in the first act, but he comes out alone at the start of the second act and knocks it out of the park.  We get a full explanation/rationalization of his "business," and some insight into his demise.  Espitallier is a confident, articulate, and fairly likeable Gordon, considering his substantial moral conflicts.
Erica Young is the naive but persistent Jean.  Young appeared in The Other Place last year, and here again shows her full range of acting skills.  She's devoted to a dead man's cell phone, inserting herself into his life after he stopped living.  Young makes this somewhat unlikely premise credible; she's sufficiently neurotic, compulsive, and innocent to sell the story.
Jay Miller (Dwight) is Gordon's under loved little brother with a justified inferiority complex.  Miller squints and grins, starved for attention, as he tries to compete with his dead brother.  Miller is a comedy lightning rod; he can get a laugh just by changing the expression on his face.

There are no slackers in this cast.  Katherine Myers (Hermia) delivers one of the best inebriated scenes in recent memory.  Madge Montgomery (Mrs. Gottlieb) is perfect as Gordon and Dwight's mother, equally loving Gordon and ignoring Dwight. Krystal Jakosky (Carlotta) is scheming, sexy, and tough as nails.
The subtitle for Dead Man's Cell Phone is "a beguiling comedy."  There are some laughs here, but as I mentioned above, the messages are the real substance.  The message that hit home for me is an important one:  we all leave loose ends when our time is up.  Gordon had no advanced warning, and he frankly left a huge mess for others when he died.  In my personal experience, even with ample warning, we will ALL leave loose ends when we die.
If you understand that your time is insufficient for all you need to do, you will be compelled to make the best possible use of the time you have.  To me, that is the central message of Dead Man's Cell Phone.
Dead Man's Cell Phone is entertaining and enlightening.  What more could one ask for?  This is a fine production of an interesting script, done with skill and enthusiasm.  If you haven't seen it, you have until September 6 to get a ticket and get to the Mary Miller Theater.

NOTES:
This show has adult content and adult language.  Use your discretion if you're thinking of bringing teenagers.
The lobster bisque in the cafe gave me a flashback to an old, but often controversial TV show:  Mary Hartman, Mary Hartman.  There's an episode about death by chicken soup.
There is ample street parking on Simpson Street and on the cross streets in the neighborhood.

There are no restaurants in the area, but the Odd13 Brewing Company is across the street from the theater.  They do not serve food, but have regular food truck service outside the brewery.
This show closes on September 6, 2014.

Pre or post show dining suggestion:
Since there are no restaurants in the immediate vicinity of the theater, we stopped by The Rex, 817 Main Street in Louisville.  The restaurant is located in one of the oldest buildings (1908) in Louisville, and it was formerly used as a movie theater.  The interior is decorated with a wide array of movie posters.
It's about a 15 minute drive from the Rex to the theater, depending on traffic and weather.  The Rex has rooftop dining (recommended in good weather.  The Rex burgers (highly recommended) are among the best in Colorado.