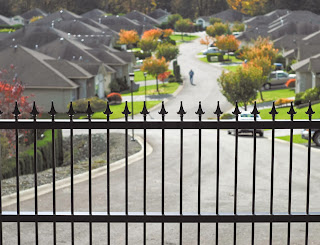 "Ye shall know the truth, and the truth shall set you free."  John, 8:32.
Like a lot of things in the Bible, John 8:32 is debatable.  Truth is an ideal.  It's hard to define, open to debate, and ultimately more painful than liberating.  That debate is the core message of Rancho Mirage.
The reality is that we all prefer "truth" to be a relatively small part of our social exchanges.  Rancho Mirage is an exercise in bringing "truth" to a circle of friends.   The results are both laugh out loud funny and explosively destructive.
Steven Dietz' script is witty, funny, inventive, and awkward for its characters.  How does one tell one's best friends that your life is a lie?  That your beautiful suburban home is in foreclosure.  That your desire for children ended in a painful miscarriage that no one ever knew about?  Or that, many years ago, you had a one night stand with the wife of your best friend?  These are awkward, painful truths that Dietz cleverly brings to the Rancho Mirage stage.
Dietz' conclusion here is a bit of a shocker (I will not spoil the surprise).  Although I didn't anticipate the arc of the last scene, it reinforces Dietz' message that truth is optional, not mandatory.  the title Rancho Mirage is significant; think about it when you're walking out of the theater.  It is the perfect metaphor for Dietz' message.
Let's make one thing clear from the outset.  Rancho Mirage is a hit.  Tickets will be difficult to get, so don't waste any time.  Get yours now.
The ensemble here is marvelous.  Bill Hahn (Nick Dahner) is well known on Denver stages, and he delivers a strong, nuanced performance here.  Watch him even when he has no lines; his facial gestures are always putting context on his performance.  Erik Sandvold (Charlie Caldwell) plays the conflicted, insecure Charlie with conviction; we never doubt his faith or his naiveté.  C. Kelly Leo (Diane Dahner) delivers one of the biggest surprises in the script when we learn that Diane has been lying all along about her trip to Tuscany.  Leo's completely convincing portrayal of innocence and duplicitousness in the same character is a pleasure to watch.
If the ensemble has a standout, it is Emily Paton Davies (Pam Caldwell).  Her Pammy is a quiet woman in a lot of pain.  Caldwell has an exquisite sense of timing, using pauses to her delivery in all the appropriate places.  Her pain is genuine, and her life is a dead end.  Paton Davies brings humor and suffering to Pammy in equal measure.
Director Chrisopher Leo brings Dietz' witty, fast paced script to the stage without missing a beat, making the most of the wealth of talent he has put on the stage.  At his direction, characters react to each other with gestures as well as wit, making the entire Rancho Mirage experience richer and more robust.
Rancho Mirage reminds us that we don't really know each other, and that sometimes it's better that way.  We show others the things we want them to see, and conceal our deepest secrets as much as possible.  Rancho Mirage demonstrates why we do that, and what happens when we don't.  It's a message worth hearing, delivered with sincerity and humor by the Curious cast and crew. 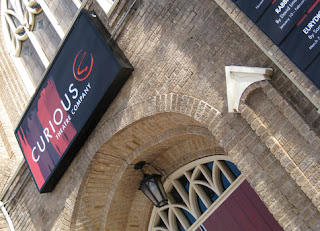 Curious Theatre is a Denver gem, giving the community a consistently high quality theater experience.  As Producing Artistic Director Chip Walton has put it, "no guts, no story."  The performances will always challenge and entertain the audience.
Rancho Mirage is a perfect example of the "guts" and the "story" making for a rewarding night of theater.  This show is highly recommended; Rancho Mirage is why we go to the theater.  See it, and take your friends if you can.  You may learn as much about your friends as you do about yourself at Rancho Mirage.

NOTES:
This show closes on December 7, 2013.
Rancho Mirage contains adult language and adult situations.  The subject matter would interest mature teens, but it is not appropriate for younger children.
In addition to street parking, Curious Theatre has permission to use space at the credit union across the street as well.
Pre or post show dining suggestions:  The Hornet, 76 Broadway, Denver CO, or Racine's, 650 Sherman Street, Denver CO.  We had dinner at Racine's before the show; the Buffalo Chicken sandwich and the Cedar Plank Salmon were both excellent.
Get your tickets here.
Photo Credits:  Curious Theatre Company