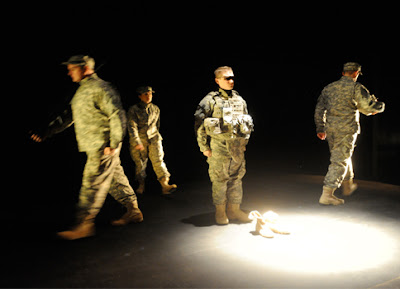 As the lights go up, the image is simple but arresting.  Dusty army boots in the middle of a stark, circular black stage.  Four soldiers, in full battle gear, desert camouflage, march smartly to center stage.

The soldier in the black sunglasses comes to a stop and begins his transformation from warrior to human being.

We can see his face, and we can see that he’s just a kid.  He’s maybe 19…perhaps 20.  There’s a real person inside that uniform.  Daniel Reeves will continue to strip off his battle hardened shell, before our very eyes, as he descends through the 9 circles of his own personal hell.

Playwright Bill Cain’s script is based on an actual incident in Iraq.  Soldiers killed and raped a 14 year old girl after murdering her mother, her father, and her 6 year old sister.   And in “9 Circles,” Daniel Reeves is held accountable for those unspeakable crimes.

Cain, a Jesuit priest, forces us to confront and examine our values.  The worst manner of atrocity has been committed in our name.  Even if our motives were noble, can that nobility justify the predictable consequences of a 19 year old killer turned loose on innocent victims?

Sean Scrutchins is a very talented actor with a promising career ahead of him.  But he may never again get a role as good as Daniel Reeves.  It’s a demanding, complex and tragic role.  Scrutchins embraces Reeves.  He becomes a coldblooded, uncaring, brutal killing machine.  He brings the sociopath to life with a performance that is brilliant in both its depth and width.  He leaves nothing on the table; he pours his entire being into the character.  Both Scrutchins and the audience are emotionally exhausted at the end of his performance.

Michael McNeill, Erik Sandvold, and Karen Slack provide flawless support for Scrutchins’ performance with a variety of roles…lawyers, a psychiatrist, a priest, and soldiers.  The ensemble works exactly as an ensemble should, creating the characters and the chemistry to tell a compelling story.  Slack’s nuanced portrayal of a conflicted psychiatrist gives Reeves’ crimes context; she exposes the institutional failures that create the conditions for his atrocities.

Reeves does his costume changes on stage.  It sounds like a simple matter, changing clothes in front of us.  But it has a powerful impact.  It makes the killer human to us.  We see him change from warrior to defendant to prisoner, and ultimately perhaps even to victim.

As we see him go through those costume changes, we see him stripped down to a person.  He’s not a caricature, not a faceless, nameless criminal.  We have to look at him and admit that he’s real.  He is like us.  And we have to confront the fact that we put a deeply flawed person in an impossible situation.

Every element …script, acting, direction, lighting, sound, set, everything comes together here to create a rare theater experience.  This is not just a performance; it’s a gift to the audience.  We are asked to examine our values, and confront the atrocities that result from those values.

This production asks us the simple question:  was it worth it?  And we must, in some sense, answer it, each of us, for ourselves, as we leave the theater.  The gift we are given here is insight, into both our values, and into ourselves.

That exercise, the examination of our values, is the difference between a performance and art.
Theater is often entertaining, but it is seldom enlightening.  “9 Circles” is both.

Don’t miss the photos displayed at the back of the theater.  Master Sergeant Terry Best’s photos are documentary evidence of the brutality of war; his captions help us begin to understand the disturbing reality we rarely see.

For more information on the incident that inspired “9 Circles,” start here.

This play is for adults.  It includes adult language, nudity, and descriptions of violence. 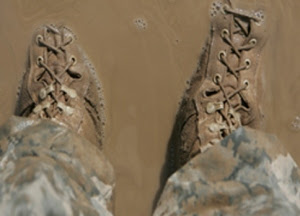