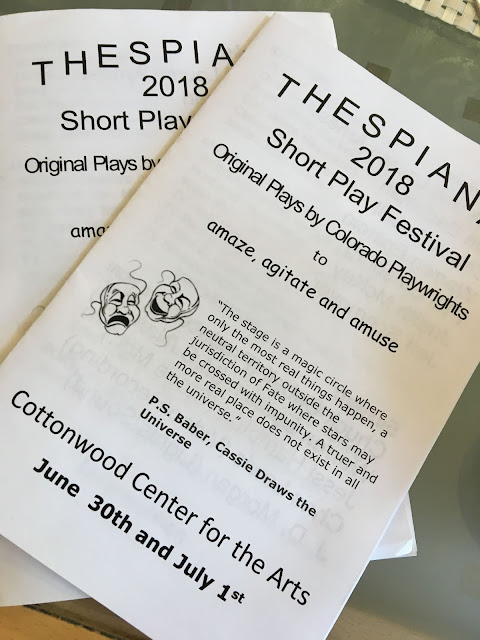 If all the world Is a stage, then Thespiana is the Colorado Springs realization of Shakespeare’s concept.  An incubator for new work, Thespiana is in its third year as a launching pad for aspiring writers.  The good news is that Thespiana is tapping a mother lode of local talent.  The not so good news is that you won’t get a chance to see it again until 2019.  It’s an annual event, one weekend, two performances.  Keep an eye on this page for next year’s lineup.

The 2018 version was a profound melange of comedy, drama, and music.  These are all works in progress, so part of the plan is to get feedback from a real audience, and in my case, from one who sees a LOT of theater.  I’ve never written a script myself, so my comments may well miss the mark at times.  But still they should be taken as sincere thoughts about what works, and at times, what could work better in these short but provocative readings.

There’s a reason why actors are wary of working with dogs and children.  They’re both potent scene stealers.  In Chuck Cabell’s Story Time, Winter Haverkorn (a first grader) and Bryce Haverkorn (a third grader) are in complete control of their scenes.  They are at once sassy and eloquent, with a full display of childhood innocence set against a background of adult issues.

Story Time is packed with a number of profound issues, from alcoholism to mental health, with excursions into grief and the stigma of mental health care.  That’s a lot of issues for a 20 minute performance, any one of which would be ample material for a full length play.

The destination here is a recognition that sometimes we all need help to get through our crises.  This could be a stronger script if it dealt with just the children’s struggles or just with the adult’s challenges.  Together they seem to overload the message.  (I was somewhat disturbed that the children were not the first priority for getting help.)  A sharper focus on fewer issues would help Story Time get to the point.

Reality TV is a fat target for comedy, and writer director Jeff Schmoyer has a lot of fun roasting the genre.  He makes a an unspoken but important point.  We all too often live our lives vicariously through others, and it’s an empty life. Schmoyer sends an eloquent, pointed message about the silliness of obsessing about “reality” TV.

Ken McKay (Husband) reads his lines with a straight face even though Schmoyer’s script makes him a helpless, hopeless caricature.  McKay skillfully connects with our frustration for the endless teases Reality TV uses to hook their audience.

And The Winner Is… is engaging, entertaining, and very creative.  However, I don’t see how it could be expanded into full length script.  The strength of the script is its frustrating tease that never delivers.  Two hours of that tease would be difficult to endure.

I’m not a fan of “reality” TV, so I may be a bit biased.  But Schmoyer’s script confirmed my judgement that the genre is not a “reality” I am familiar with.  My TV has an on/off switch, and I use it.

Mark (music) and Lauren Arnest (music/lyrics) are working on a massive project:  a musical about robber barons, railroads, and labor in 19th century America.  Iron and Gold is not a finished product yet, but the abbreviated Thesepiana version makes me anxious to see the full length production.

For their contribution to the 2018 Thespiana, the Arnest team assembled some of the finest voices in Southern Colorado:  Neika Rosenberger, Erik Brevik, Peter Tuff, Meg Prymus and Todd Teske took the operatic score to places I never expected.  I was at the edge of my seat, leaning forward to get a better look at these accomplished and very talented voices.  When they finished, the full house at the Cottonwood gave them a thunderous round of applause.

Mark and Lauren Arnest gave us some of the musical bits of Iron and Gold, but none of the book that tells the story.  That makes it difficult to evaluate.  But if the book is as compelling as the music, Iron and Gold could be a very big deal when it’s finished.

Warren Epstein is a talented guy.  Borscht Belted is ample proof.  His abbreviated version at Thespiana 2018 is a preview of the full length production in January 2019 at the Millibo Art Theater.

Borsch Belted is a solo performance, with all tasks done by Epstein himself.  He is the playwright, director, and performer (as well as serving as the Thespiana M.C.).  Epstein revisits an interview with the comedian known as “The King of the Borscht Belt.”  The New York Borscht Belt produced a huge number of stand up comics in the 1950s-1990s, many of whom went on to bigger and better venues (Alan King, Sid Caesar, Mel Brooks, and Buddy Hackett, to name just a few).

Epstein incorporates the the traditional Jewish humor style in his presentation, sprinkling some witty one liners throughout the performance.  True to the tradition, Epstein uses self deprecating humor (“I get no respect”), and insulting zingers (‘I took my mother-in-law on a pleasure trip…I drove her to the airport”).

Epstein’s reading was smooth, giving an impromptu appearance to a detailed script.  As he finishes his work for the January, 2019 premier of Borsch Belted, it might be useful to diverge somewhat from “The King of the Borscht Belt.”  Throw in some Buddy Hackett, Peter Sellers, Groucho Marx or Jerry Lewis.  While “The King” didn’t go on to the same success as many of the Borsch Belters, he did something just as important.  He carved out a niche and made it into a successful career in the Borsch Belt.

Sue Bachman’s Elevated puts us in an elevator…one where eye contact is not the worst problem the passengers encounter.  Bachman puts us in a creepy elevator where apparently anything can happen…and does.

The story arc involves some serious self reflection; if you’re in a creepy elevator, perhaps your life has taken a turn for the worst.  The introspection is interesting; elevators only go up and down.  Sometimes we need veer off in a new direction.  Bachman’s “Elevator Woman” makes that change in direction.  That’s where the otherwise serious Elevated veers into silliness.

I won’t spoil Elevated with too much detail.  That said, though, the climax is entirely unexpected, jarring, and ultimately unsatisfying.  Perhaps in the next version the climax will be foreshadowed, making it more meaningful for the audience.

Judith McKay’s Temptation of a Playwright is an interesting take on the creative process.  Picture Gwen (Mary Sprunger-Froese), a mature woman who would like to do something meaningful with her life.  She wants to write a play, even though she’s never done anything of the sort.

How does one write his or her first play?  McKay skips past the basics; Temptations of a Playwright is not about inspiration, qualifications, or experience.  It’s about exposing oneself before a reader, an audience, and potentially the world at large.  Playwrights usually draw from his or her personal experience.  That takes courage.

Given the changing nature of privacy, questioning the reduced privacy for a writer is legitimate.  Gwen is not sure she’s ready to bare her soul.

The subject matter here is interesting, at least to me.  However, I’m not sure a wide audience would relate to the personal privacy struggles of becoming a writer.  Artists whose personal struggles are much more substantial often have a wide influence (Ernest Hemingway committed suicide, Vincent Van Gogh mutilated his ear AND committed suicide).

McKay’s subject (the creative process) has been done before.  A quick read of some other works might be helpful in fleshing out the travails of the creative process.  I recommend Seminar by Teresa Rebeck, and Ghost-Writer by Michael Hollinger.

Phil Ginsburg entered his work Flush in the 2017 Thespiana Festival.  It wasn’t the last performance.  Flush was later produced by the Manhattan Repertory Theatre in New York City.  That’s a significant accomplishment for both Ginsburg and for Thespiana.

Ginsberg is back in 2018 with 10 Minutes, a somewhat satirical take on the end of the world.  His characters live out the last 10 minutes of their lives onstage, waiting for the nuclear bomb blasts that will destroy all life on Earth.

Ginsburg’s characters get their last chance wrong.  Rather than using their last 10 minutes productively, say to connect with loved ones, Man (Tom Paradise) and Woman (Kathy Paradise) immerse themselves in banality.  In this case, one dies as one lives; empty, meaningless lives end in emptiness.

Ask yourself the question:  what would you do with the last 10 minutes of your life?  Nuclear bombs aside, we will all eventually face those 10 minutes.  Your answer matters; there are no “do overs” for that last chance at getting things right.

Ginsburg’s10 Minutes is a depressing take on the value of these lives…and the inevitable deaths of the characters.  We may not all live inspiring successful lives, but we are hopefully not as lost and pathetic as Man and Woman.

10 minutes is both thought provoking and entertaining, but expanding it into a full length play will be challenging.  10 minutes is nearly all we can take of Man and Woman.  Retitled as 2 Hours, Ginsburg’s Armageddon would be as difficult to watch as it would be to write.

“All the world is a stage.”  Colorado Springs included.  Thespiana is a vital effort to put emerging work on display.  Catch it next year if you can.  You’ll be entertained, challenged, and inspired by your talented neighbors and friends.  And someday you can say you saw one or more of them before they became famous.

“All the world’s a stage, And all the men and women merely players; They have their exits and their entrances; And one man in his time plays many parts…(from As You Like It by William Shakespeare).

Song for the Knights of Labor:  Peter Tuff, ensemble.