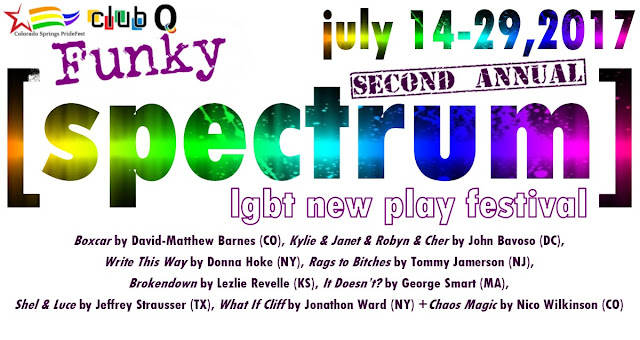 It’s like catching lightning in a bottle.  Funky Little Theater did its first [spectrum] short play festival (hereafter [spectrum]) in March 2016, and was inundated with scripts.  The second annual version is running through July 29, bringing the total number of scripts submitted in two years to more than 400.  Funky is now bringing the thunder with the lightning to its stage with the best of the latest [spectrum] submissions.

Scripts are limited to (approximately)10 minutes.  Funky provides directors, actors, and set pieces for (in their considered judgment) the best of the submissions.  This year, [spectrum] delivers nine thought provoking and entertaining bursts of new theater:

Wilkinson’s piece pits witches against parents who have secrets, with disturbing results for the newborn baby.

Boxcar is a dark (“Do you think we’ll be dead by morning?”  “No. By midnight.”) story of forbidden young love.  Spending a night in a boxcar with the love of your life is one way to avoid confronting your peers at a homecoming dance.

3.  What If Cliff, by Jonathon Ward (directed by Sallie Walker, with Megan Edwards and Josh Boehnke).

Ward’s focus is a sexual sibling rivalry; a brother and a sister both love the same woman.  Can this complicated dilemma end well, or is it doomed from the start?

4.  My True Self, by Will Driscoll and Billie Allor (directed by Chris Medina, with Driscoll playing himself).

Driscoll’s story is his own.  My True Self is far and away the most personal and intimate entry in this year’s [spectrum].   Driscoll’s True Self is a compelling transgender story of truth and courage.

Strausser’s love story doesn’t have a happy ending.  Not everyone has the courage to be true to his or her own feelings.

Revelle’s entry uses comedy to tell the touching story of a sensitive mother and her closeted daughter.

If you’re familiar with the “It Gets Better” project, you need to also consider that maybe “It Doesn’t.”  If you’re 15 years old and your dick pic just went viral at school, it’s difficult to see how it will ever “get better.”

Hoke plays with gender roles as her “writer” tries to concoct a story about a female construction worker.

Bavoso puts sexual stereotypes to the test; Medina is a straight guy reaching out for gay friends.  It’s all very funny, but also poignant.  Sometimes we need to escape from our straight and gay tribes and mingle with each other.

[spectrum] is a full plate, teasing with appetizers (What If Cliff, Write This Way), followed by hearty main courses (Brokendown, Shel & Luce, It Doesn’t), and a delicious dessert (Kylie & Janet & Robyn & Cher).  Throw in a personal story of gender transition (My True Self) and you literally have something for everyone at the second annual [spectrum] fest.

Funky includes a ballot with each program; the audience is encouraged to identify their favorite 10 minute entry as well as the best actor and actress.  Since I’ve already done the exercise, here are my favorites:

The ensemble has chemistry, the script is funny, and the message is hopeful.

Chris Medina is spot on as the straight guy with a queer eye.  He also follows direction well (directing himself).

Meg Edwards in What If Cliff (her Funky debut).

[spectrum] lgbt short play festival is a striking success story.  Funky Little Theater is a chronic overachiever in bringing new works to Colorado Springs.  Chris Medina is the head overachiever, directing 6 of the 9 episodes.  If that’s not enough, he also appears onstage in two shows.  Medina’s commitment to Funky, to theater, and to the Colorado Springs arts community is remarkable.  With relatively few resources, he has put Funky and Colorado Springs on the theater map.  [spectrum] is ample proof that Medina/Funky have become a creative force for southern Colorado.

While most of the works submitted for [spectrum] are new, some (including Boxcar) have been performed elsewhere or have been published in some form.  If not already the case, Funky may want to make sure that new, unpublished playwrights are aware that they will compete with published and produced writers when submitting work to [spectrum].

Funky has partnered with Colorado Springs Pride and Club Q for the [spectrum] production.