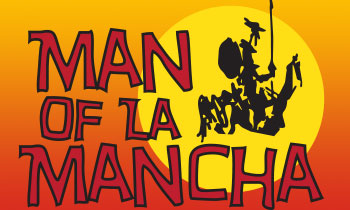 Man of La Mancha is a play within a play based loosely on Miguel de Cervante’s 1605 novel Don Quixote.  Cervante’s classic portrayed Don Quixote (from whom the adjective “quixotic” is derived) as an aspiring knight totally devoted to the code of chivalry.  Dale Wasserman’s musical adaption won five Tony Awards in 1966, including Best Musical.

Quixote’s quest is to fight evil everywhere and to promote his cause of virtue, manners, and honor.  Despite the lofty ideals, Cervantes and Wasserman both portray Quixote as untethered to reality.  Quixote has imaginary enemies, resulting in “tilting at windmills” when he mistakes one for a giant.

The Fine Arts Center production grabs your attention as soon as you enter the SaGaJi theatre and see the set.  Christopher Sheley’s designs never disappoint, and his Man of La Mancha work is splendid.  Anchored by huge classical columns, the set includes a reverse drawbridge stairway that descends on cue from the ceiling.  It provides a grand entrance for Cervantes (Stephen Day) and his sidekick Sancho (Sammie Joe Kinnett).  Benjamin Heston’s sound design is spectacular throughout, but never more so than when he makes Sheley’s stairs creak, clank and rumble onto the stage.  Costume designer Sydney Gallas has dressed the cast in an array of period perfect costumes, from a belly dancer to sexy wenches and especially to men in blousy pants.  Gallas’ attention to detail is notable; she emblazoned Cervantes’ knee high boots with gold crosses.

Stephen Day might well be a descendant of Cervantes and Quixote.  He’s that good.  There’s no daylight between Day and his 400 year old fictional character.  Day brings Cervantes/Quixote to life with the look, the sound, and the moral commitment of his sincere but confused character.  His acting is dazzling, but it is his stunning singing voice that defines his performance.  When he sang The Impossible Dream (The Quest), it’s as if I was really hearing the standard for the very first time.  Day’s performance, from curtain to curtain, is flawless.

Gina Naomi Baez gets the plum female lead role as Aldonza/Dulcinea.  The role is a big stretch; Baez must transform from a sassy, saucy sexy wench to a true believer in Quixote’s purity of heart.  She is, without question, up to the task.  Her Aldonza takes no prisoners; she enchants and then dominates her male suitors.  She’s a modern woman in that she knows how to use her femininity to get what she wants.  When Baez  becomes Dulcinea, she lets her inner beauty outshine her demons.  Quixote makes Dulcinea a better person, and Baez does the same for all of us.  Baez distinguishes herself with her gorgeous voice; her reprise of “Dulcinea” near the end of the show is at once delicate and powerful.

It’s a large and very capable cast, but two stood out for me.  I’ve seen both Sammie Joe Kinnett and Michael Augenstein in other productions.  None of those productions involved any singing.  Kinnett and Augustein handled the music admirably here.  Kinnett’s “I Really Like Him” made me sit up and take notice.  Augenstein nailed his solo“The Psalm,” putting his heart and soul into the latin lyrics.

Director Scott RC Levy sets a quick pace; there’s not a wasted moment in the entire two hour production.  Although Man of La Mancha was originally written as a one act musical, the other productions I have seen were done in two acts.  Levy wisely uses the original one act script, making for a brisk, uninterrupted experience.  Casting Sammie Joe Kinnett as Sancho was brilliant; he’s the finest comedic actor working in Colorado Springs.  Levy’s Sancho is part Cervantes and part Kinnett, and it’s a marvelous combination.

There’s only one thing I would have changed in this Fine Arts Center production.  The gypsy dance scene is done with a lighted white sheet backdrop.  Setting it up was a little clunky, and the backdrop did little to enhance the dance.  If anything, it distracted somewhat from the otherwise spectacular set.

Wasserman’s interpretation of Don Quixote is, in his own words, “continuous collisions of illusion and reality” (from the program notes).  Man of La Mancha deems illusion as the more powerful force.  That’s a debatable concept…in fact, it’s arguably an “Impossible Dream:”

This is my quest, to follow that star
No matter how hopeless,
No matter how far
To fight for the right
Without question or pause
To be willing to march into hell
For a heavenly cause

Quixote runs headlong into his illusion, crashing into the reality of the Spanish Inquisition.  There’s a lesson here.  A righteous quest is noble, but reality requires one to temper the nobility of purpose with achievable goals.  It is unwise to “march into hell for a heavenly cause” without some understanding of the consequences.  Man of La Mancha celebrates the goodness that is sometimes buried in our souls, but it does not change the reality that evil is a very real and very powerful force.  Man of La Mancha is inspiring, but we need to recognize that there's a fine line between illusion and madness.

Man of La Mancha is suitable for teens and up, with parental discretion regarding violence and sexual situations.  It it were a movie, Man of La Mancha would likely be rated PG 13.

Even if you’ve never seen Man of La Mancha, you’ve probably heard some of the magnificent music.  “The Impossible Dream (The Quest)” has been recorded by nearly everyone: Frank Sinatra, Elvis Presley, Glen Campbell, Andy Williams, Cher, Roberta Flack, The Temptations, and the Mormon Tabernacle Choir, among many others, have released versions of the song.  “Dulcinea” is a beautiful ballad, while “Man of La Mancha (I, Don Quixote)” is a stirring, toe tapping anthem.

Captain of The Inquisition:  Jonathan Eberhardt

*Member of Actor’s Equity Association
Posted by Bill Wheeler at 8:44 AM