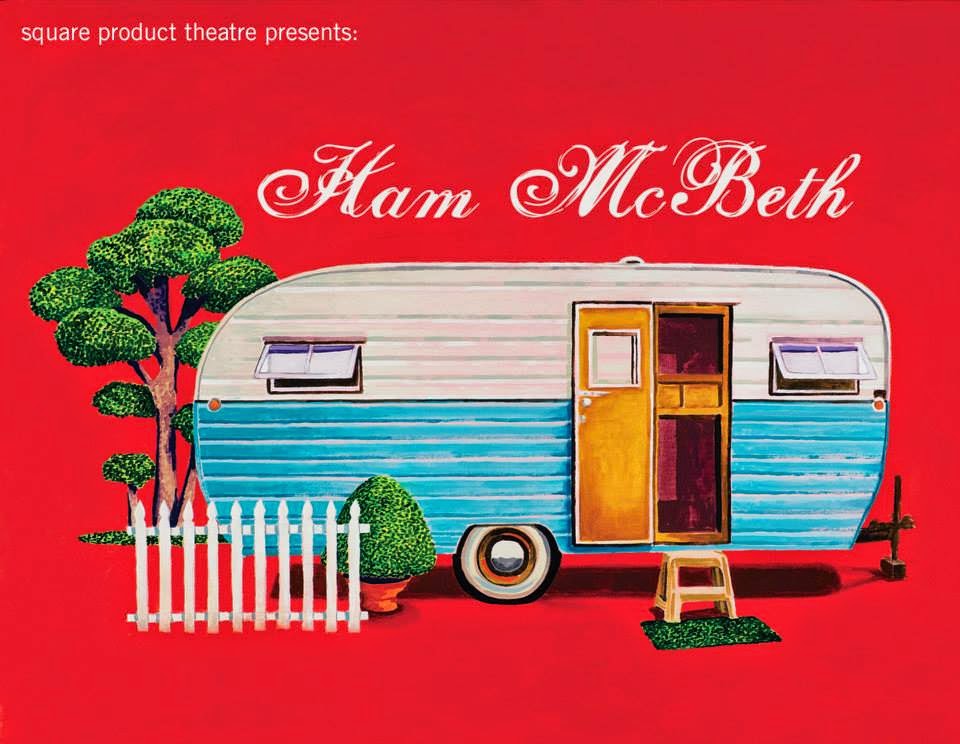 Those who are looking for traditional theater fare have abundant choices.  In recent years, front range audiences have had multiple options for shows like The Full Monty, Forever Plaid, Sylvia, Spamalot, Venus in Fur, and a host of other sure hits.  There’s nothing wrong with that.  No one should fault a theater company for producing shows that a lot of people will pay to see.  Theaters, after all, are not just artistic enterprises.  They are also business enterprises, with balance sheets and bills to pay.

For experimental, unconventional, and original theater, though, the choices are much more limited.  There’s an inherent and substantial risk in producing original, unproven material.  That risk carries the potential of both reward and calamity.

Square Product Theatre Company, to its artistic credit, has taken such a risk with Ham McBeth, and on balance, the results are definitely rewarding rather than calamitous.  Ham McBeth is a fresh, novel mashup of Shakespeare’s story, Stevie Nicks, and a trailer park goth girl.

Frustrated by Christa, the supervisor/enforcer for the trailer park rules, Ham Jones (Emily K. Harrison) and Aquanetta (MIchelle Moore) take inspiration from the bard, without actually resorting to murder.  For those of us who have dealt with HOA overreach, Christa is symbolic of the excesses of power hungry zealots.  Ham and Aquanetta wisely try to steer clear of confrontations with Christa, but they find it much harder than they expected.

The plot is less of a story than a device to string together some surprising and provocative moments on the stage.  For example, early in the performance, Ham, on guitar, and Aquanetta on triangle, team up for a striking rendition of Rhiannon.  Harrison and Moore harmonize nicely, and with some lyrics lifted from Shakespeare, the effect is impressive.

I couldn’t help but reflect on some similarities between the enduring quality of Shakespeare’s work and the seemingly timeless quality of Fleetwood Mac’s Rumours.  Shakespeare, of course, has a much longer track record (he’s gone, but not forgotten, after 400 years), but Rumours is still fresh after 40 years.  In that context, the mashup makes a lot of sense.

The high point of Ham McBeth is unquestionably the dream sequence near the end of the show.  Ham confused her blood pressure medication with Ambien, causing a 4 day blackout.  During her blackout, she has a bizarre, chaotic dream that involves a variety of exotic characters (I’m looking at you, Chick-Chick), dancing, singing (Tusk, another Fleetwood Mac/Stevie Nicks classic) and Mayhem.  When I say Mayhem, (with a capital M), I mean gratuitous abuse of deli meat, bumping, grinding, and felony littering.  It reminded me of a 3 ring circus; there’s so much action that it’s difficult to take it all in.

Emily K. Harrison does Ham with a pitch perfect southern accent.  She may live in a trailer, but that doesn’t diminish her interest in Shakespeare’s work (as translated into contemporary Goth by Aquanetta).  Harrison’s strength here is her ability to credibly portray a loving mother with a decidedly unnatural obsession with Stevie Nicks.

Michelle Moore’s Aquanetta shows us what we would want in our own daughters; rebellious kids but studious, centered, and intelligent.  She’s a good kid, despite the goth stereotypes we bring to the table.  If there’s no other message in Ham Jones, that one is a sufficient take away.  Kids are kids, and despite their appearances, good kids come in many varieties.

Ryan Page plays Tristan, but don’t worry about who Tristan is or why he’s in the cast.  Just enjoy the show he puts on.  Page struts, swaggers, prances and provides a bushel of eye candy to the audience.  You will not see some of his dance moves anywhere else.  Just try taking your eyes off him.  You can’t.

I think it only fair to point out what Ham McBeth is not, as well as what it is.  It is not traditional theater.  It is not a profound social commentary.  It is not a highly structured story with a beginning, a middle, and an end.  If you are looking for any of those items as part of your theater experience, keep looking.

Ham McBeth is original, unpredictable, unconventional, and, in its own way, entertaining.  It’s definitely not for everyone.  That said, though, art, including theater, should push the boundaries of our comfort zones.  Using a collaborative creative process, Square Product Theatre Company has done exactly that here.  The result is a different, interesting, and worthwhile experience for those who value originality and creativity.

This show is suitable for all ages, and for all Stevie Nicks fans.

T:ACO, at 1175 Walnut Street in Boulder, is a 5 minute drive to or from the theater and offers fresh Mexican street tacos and beyond.  I had the quesadilla, stuffed with pork and pineapple.  Roxie had the Mexican Pizza.  Both were yummy, and plenty to eat.  Parking on Walnut Street is tough, but there’s a parking ramp ($1.75/hour) across the street.  At that price, it’s better than endlessly driving around the block looking for a meter.

Chick-Chick:  Laura Ann Samuelson
Posted by Bill Wheeler at 11:20 AM