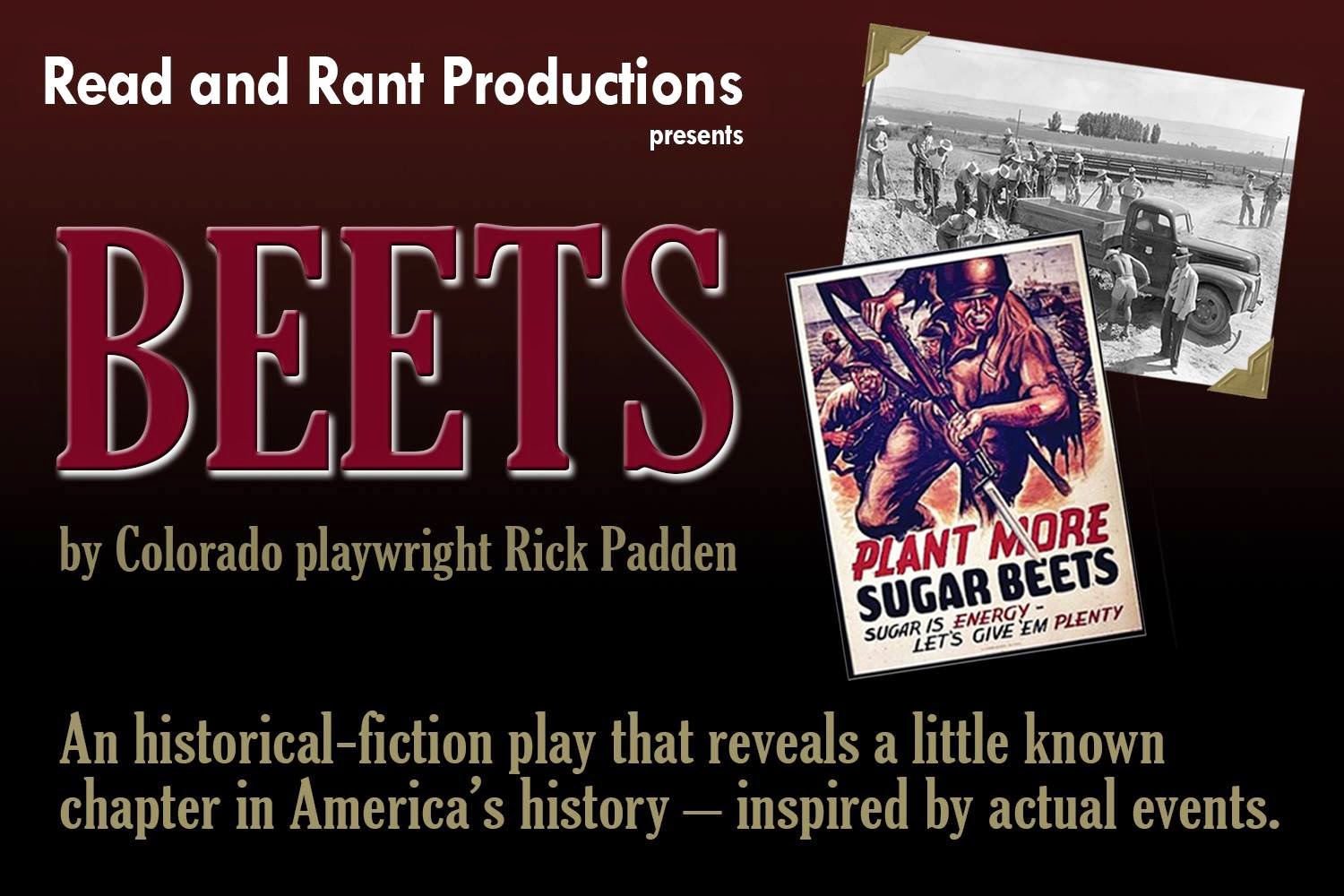 I may have a decent excuse for not knowing my Colorado history; I was raised in Madison Wisconsin.  Like so many others, I didn’t come to Colorado until I was an adult (or what passes for "adult" at age 41) in late 1989.  Even so, it turns out that I’m not alone; there are a lot of native Coloradans who don’t know that the state was the site of several Prisoner of War (POW) camps during World War II.  Beets is about POWs from the Greeley camp.  It’s historically accurate, and it’s a compelling story of conflicted emotions and challenged values.

The story is set in rural Berthoud, Colorado in the mid 1940s.  Northern Colorado has been a significant producer of sugar beets since the mid 19th century, and the title Beets refers to the crop that Fred and Isabelle Hunt are farming.  Then, as now, getting sufficient unskilled labor to plant, cultivate, and harvest the crop was a challenge.

The solution, it turns out, was to have the POWs work in the fields.  Through an arrangement with the government, POWs were given work assignments on local farms, under a strict set of rules to prevent escapes and other problems.  Although the rules were loosely enforced, there were few problems with the German soldiers/prisoners in the fields.

Fred Hunt (Andrew Uhlenhopp) had a big beef with the program; his son was fighting the Germans overseas, and he wanted no part of having POWs working his fields.  Had it not been for the likelihood that his crop would wilt in the field and die without sufficient hands to harvest it, he would have never permitted POWs on his property.  On learning that his son had been taken prisoner by the Germans, he became even more hostile to the plan.

Fortunately for Fred, his wife Isabelle (played by Andrew's actual wife, Kelly Uhlenhopp), is a beacon of reason and sanity for Fred and their daughter Anna (played by Jordyn Morgan).  She has a habit of reminding Fred (and by extension, all of us) about our basic values.  As she points out to Fred, the POWs are just boys, like their own son, who were doing their duty for their country.  They were the enemy, but they are no longer a threat to the the US, or to the farmers of northern Colorado.

Anna, for her part, is taken with Dieter
(Drew Hirschboeck, he of the impeccable German accent), one of the POWs working on their farm.  The love story between Anna and Dieter develops slowly, but it is always foreshadowing the climactic last scene, as Fred is finally forced to deal with Dieter as a human being instead of an evil fantasy.

This is a fine cast doing justice to an intriguing script.  Andrew Uhlenhopp’s Fred is feisty, focused, and probably clinically depressed.  He struggles with his dilemma; how can he host German POWs while his own son is in a German POW camp?  Should his loyalty to his son trump his duty to financially support the rest of his family?  Beyond the conflict with loyalty to his son, Fred also has to face a budding romance between his daughter and a German soldier.  The emotions are real; we truly empathize with Fred.

Kelly Uhlenhopp is pitch perfect as the moral compass for the script.  She keeps bringing us back to our real values.  We wouldn’t want our soldiers treated badly in captivity, so we must treat their soldiers with dignity and respect.  Kelly Uhlenhopp brings the true values to the conflict, reminding us of who we are, and who we want to be.  It’s no coincidence that we are currently reliving that moral conflict today.  In fact, polls tell us that Americans now favor torturing prisoners.  The American values of the 1940s are in serious decline, and Uhlenhopp poignantly reminds us about why these issues matter.

One of the significant reasons why Americans have changed their attitudes on torture can be traced back to the "War on Terror."  On January 25, 2002, Alberto Gonzales, Attorney General, declared the Geneva Conventions on how to treat POWs described as "obsolete" and "quaint:"

"This new paradigm renders obsolete Geneva's strict limitations on questioning of enemy prisoners and renders quaint some of its provisions requiring that captured enemy be afforded such things as commissary privileges."   (Emphasis added.)

Since that day, some very shameful acts have been committed in our name.  There is little evidence those shameful acts have either 1) made us more safe, or 2) advanced any demonstrable military objective.  Watching Beets, I couldn’t help but feel nostalgic for the days when our values were unambiguous and undisputed.

The love story between Anna and Dieter is a fitting plot device to play out this conflict of values.  Everything is more personal when it involves us directly.  It is our sons and daughters who will inherit the values left intact after the conflict is resolved.  Both Jordyn Morgan and Drew Hirschboeck draw us in and help us see ourselves and others as individual human beings.  They tenderly change the context from world war to living our lives as we see fit.

The set, the sound, the lights, and the direction here are all first rate, as are all the performances.  If I have any quibble with Beets, it is that the conclusion is abrupt and somewhat muddled.  Leaving the audience hanging can be an effective plot device, but here it seems inconclusive rather than thought provoking.

Beets gets my recommendation for multiple reasons, including that it sheds light on an obscure part of Colorado history,and that it does so in a dramatic and entertaining way.  Issues of love, war, and foreign immigration (whether voluntary or forced) are just as relevant now as they were in World War II.   Beets will make you think about some very big ideas about how we wage war and who and how we love.  Any show that can put such profound subjects into clear focus is well worth the price of admission.

“Read and Rant” is the Aurora Fox’s script-reading book club. It meets on the 2nd Tuesday of each month from 7pm – 10pm to discuss 2 or 3 scripts that were assigned the previous month. The only requirements to become a member are that you attend the meetings and that you do not discuss the scripts outside of the group.

For additional historical back ground on the POW camps in Colorado and the sugar beet industry, please follow these links:

We had BBQ at Jim & Nick’s Northfield location.  It’s true southern (Alabama based) BBQ, with a side of community service.  The chain works with local charities to support children, education, health, wellness, and local farming.  It’s a 15 minute drive to/from the Aurora Fox.  Menu here.