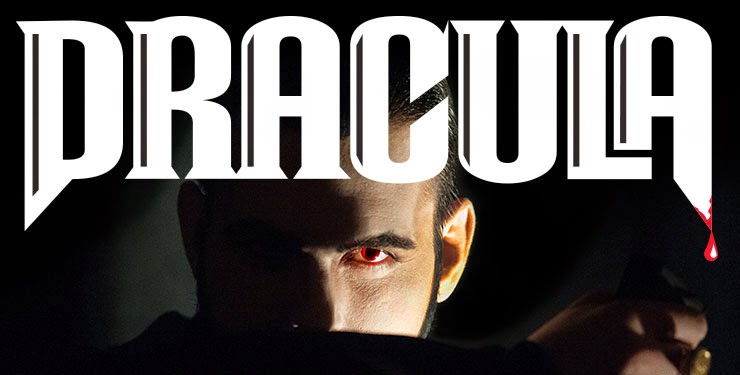 If you've got a pulse, Dracula would like to invite you to the Colorado Springs Fine Arts Center.  "Enter freely and of your own will," as the Count would say.  He will make your blood run cold.  Run.  Cold. And he'd really like a taste...
Playwright Steven Dietz describes the title character of Bram Stoker's Dracula as a "brilliant, seductive, fanged beast waiting to suck the blood from your throat."  Make no mistake.  That very beast is now walking the stage at the Fine Arts Center, just in time for Halloween.
Stoker is the author of the 1897 gothic tale of the vampire of Translyvania, one of the most enduring and frightening stories ever.  Dietz brings Stoker's story to the stage with every gruesome detail intact.  I need not worry about spoilers here; Dracula is a familiar part of modern culture.  Dietz is faithful to the original plot, and the play is every bit as disturbing as the novel.
The Fine Arts Center gives Dracula a full throttle, no holds barred staging that, despite the familiar story, can still deliver a dose of shock and awe to even the bravest souls in the house.  It's not a spoiler to say that there will be blood...lots of it.  The Fine Arts Center is not afraid to literally put a stake through the heart of its evil characters, right before your eyes.
Dracula features some excellent actors, attacking their roles with a sexy, lusty, bloodthirsty zeal.
Michael Lee (Renfield) is convincingly crazy, and he's the focal point every time he is on the stage.  He rants, he raves, and he scares the daylights out of everyone in earshot.  Lee recently appeared in the zany comedy The Servant of Two Masters.   He is equally confident in both his comedy and Gothic vampire roles, which is an impressive range for any actor.
Katie Consamus (Lucy) brings her sexy swagger to Lucy, changing from a proper Victorian "lady" to a voracious, sexually aggressive vixen.  She is marvelous in both modes, but she practically smolders as the seductive, bloodthirsty Lucy.
Matt Radcliffe (Dracula) has somewhat less time on stage here that one might expect for a title character, but that doesn't diminish his complete domination of the stage when he appears.  He's a cool but complicated Dracula, a little less scary than one might expect, but a lot more human and real.  Radcliffe is on a roll; he was excellent recently in Art at the Springs Ensemble Theatre.  Dracula is another fine addition to his resumé.
Jessica Weaver (Mina) brings a sweet innocence to her character; of course, that's before she's corrupted by the Count.  She has what is probably the most striking scene in Dracula; she licks blood off the Count's bare chest.  It's a moment of striking power.  She is dominated by the Count, she thirsts for blood.  He gives it to her, and the result is simultaneously repugnant and sensual.  Weaver's performance sparkles; she is a perfect, if unfortunate, victim.
The set is beautiful.  It's a huge two story castle/asylum that is perfect in every gothic detail.  Set Designer Christopher L. Sheley takes us from Transylvania to England seamlessly.
The lighting design (Holly Anne Rawls) skillfully walks the line between the darkness of the story and the color and brilliance of the crimson blood lust on stage.  Sound designer Alex Ruhlin has cranked up the volume for Dracula.  This show is loud, and the impact is substantial.  In the second act, Ruhlin literally has Dracula's voice booming from all corners of the room; it's vampire surround sound.  Ruhlin raises sound design a notch here.  It's not just sound...it's an integral part of the story.
I do have a couple of quibbles with Dracula.  The SaGaJi Theatre is a big room, seating approximately 400 patrons.  The stage is also large, and for Dracula, the set seemed needlessly remote from the audience.  Most of the action is upstage, far from the audience.  That's unfortunate; Dracula has a lot of very intimate moments that are difficult to appreciate for those not in the front rows.  Director Nathan Halvorson had me squinting to see fangs dig into flesh (I was near the middle of the room).  A lot of action takes place around a bed at center stage; perhaps the bed could be moved downstage to be more visible.
In this preview performance, there seemed to be some distortion in the actors microphones; at times the dialog was muddled.  I'm not sure if it was a problem with volume levels or some other setting, but I was straining to understand about 20% of the lines.  It made parts of the story difficult to follow.
Quibbles aside, the audience was very enthusiastic; I even saw one couple sporting their own fangs.  The Fine Arts Center is known for it's excellent production values and high quality performances; Dracula definitely adds to that reputation.  For those who are seeking a high powered, well done Halloween treat, Dracula should definitely be on your "to do" list.
NOTES:
Due to graphic violence, this show is recommended (by the Fine Arts Center) for ages 16 and up.  I might go with 14 and up, given that kids that age have already seen a lot of gore in films and on television.
There's a dynamite 2 for 1 ticket offer...if you're willing to bleed out a pint.  If you give blood to the Penrose Bloodmobile (also known as the "Blood Vessel"), you get the 50% discount.
Here's the Bloodmobile schedule: