William Shakespeare's Land of the Dead 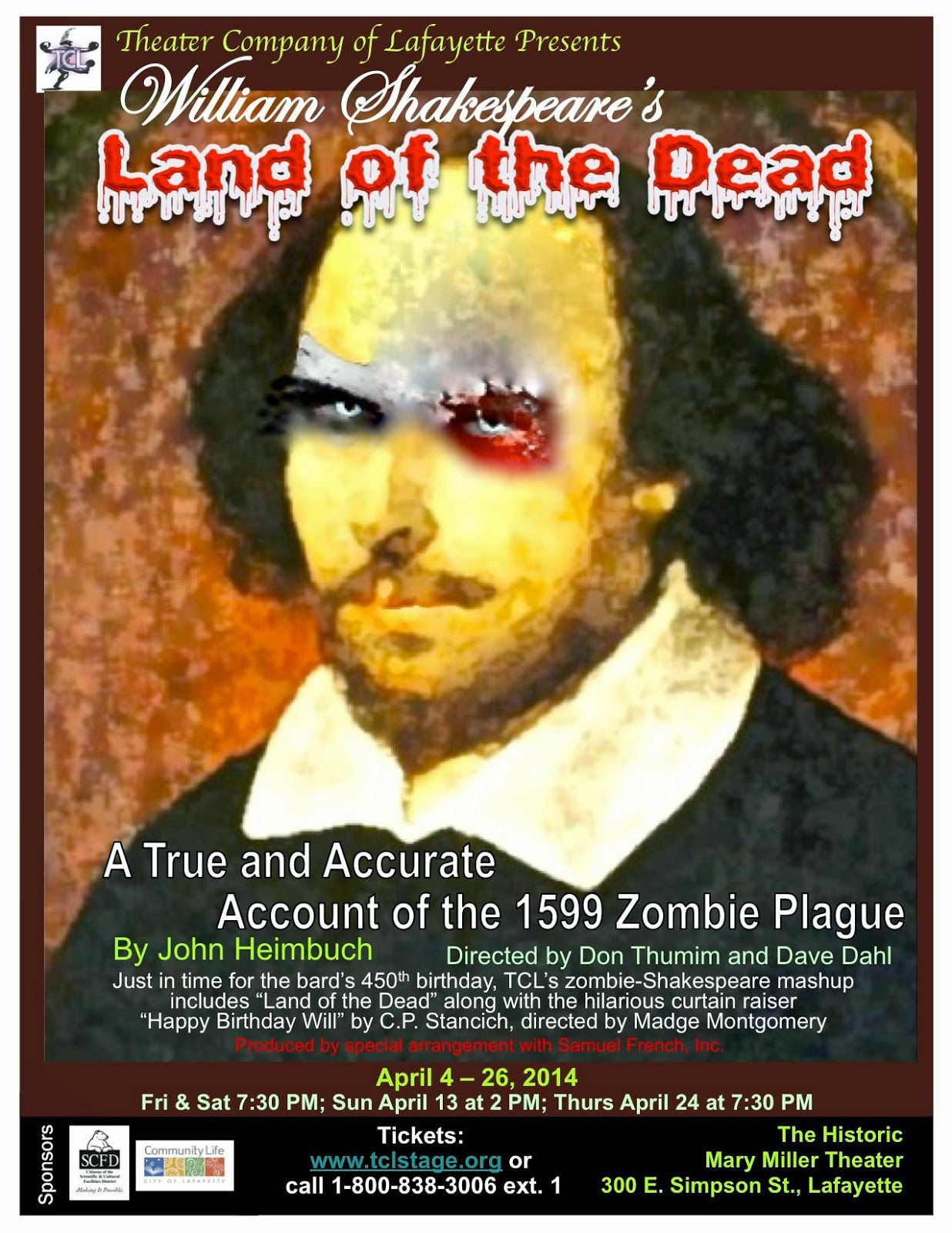 Sometimes its difficult to keep The Bard fresh and relevant after 400 years.  Sure, he was a pretty good playwright back in the day, but things have changed a lot since he wrote his last play.  Or have they?

Lafayette Theatre Company's current offering brings Shakespeare back, live and in person, at The Globe Theater.  He's dealing with Will Kemp, the clown, lawyer ("The first thing we do, let's kill all the lawyers") Francis Bacon, and a zombie horde.  Subtitled,"A true and accurate account of the 1599 Zombie Plague," some literary license has been taken in the script.  Given that the Plague was hardly a fertile subject for comedy, taking some liberties with the facts is both understandable and required.


The premise is that the Plague victims are perhaps not really dead, but "undead."  And they are bringing mayhem to The Globe, which turns into a sanctuary for the non-afflicted.  Set in Shakespeare's time 450 years ago, there's a lot of actors/actresses in drag, probably more than in any other show I've ever seen.  It's all in good fun, and more endearing if not as enduring as Shakespeare's more familiar works.

The script is funnier than one would expect by combining two very divergent ingredients (Shakespeare and zombies).  They mesh, or should I say mash, quite well.  It's not exactly Shakespeare, and it's not all out zombie mayhem.  Rather, William Shakespeare's Land of the Dead is quirky, campy, freaky, and always entertaining.

William Shakespeare's Land of the Dead (LOTD) starts off with a bang with skit called Happy Birthday Will.  It's the best, and frankly the longest, pre-show warning about using your "electronic communication devices" you will probably ever see.  It's a send up, and a perfect one, done in character. It's a welcome relief from the standard spiel about audience etiquette.

The acting is impressive.  Kurt Keilbach makes a great Shakespeare; he delivers abundant gravitas along with a "wink and smile" mischievousness as The Bard.  Keilbach effectively humanizes a literary icon without diminishing his genius.

Artemis Martin plays Will Kemp, one of Shakespeare's contemporaries and a famous clown.  Martin's comedic timing and naughty demeanor are a perfect foil for Shakespeare, and he truly seems to get under Keilbach's skin at every opportunity.

John Rice (Phyl Park) is marvelous; he coyly blurs the line between male and female.  He is suitably feminine, with occasional flashes of his true masculine nature.  Vonalda Utterback (also in drag) gives us a shining Francis Bacon, strutting around like a wealthy lawyer did then...and still does now.  Madge Montgomery as Queen Elizabeth is as regal as she is fussy.

With Pam Bennet and Chris Pash's functional and interesting set, Shannon Gurgens' exquisite period costumes, effective lighting and sound, and Heather Woodruff's outstanding makeup for the zombies, LOTD is a solid production on all the technical aspects.

Double directors Dave Dahl & Don Thumim had a huge task from the outset:  directing traffic on a very small stage with a very large cast of eighteen actors.  It all works seamlessly; every actor, every prop, every entrance and exit went as planned.  Fight Director Jenn Zuko's scenes are very well done, adding credible chaos between the zombies and the zombie slayers.

Perhaps not very much has changed since Shakespeare's time.  We are still scared of the unknown, we often have too much drama in our lives, and we still love a good laugh.  The Theater Company of Lafayette honors the classics and here and gives us a lot of laughs in the process.  LOTD is a fun night out at the theater; I recommend it for fans of the classics and for fans of those afflicted but not quite dead yet.

There is ample free street parking at the theater.

This show is suitable for all ages, although some youngsters could be disturbed by the zombies and/or confused by actors playing out of their assigned genders.

If you haven't been there, try Proto's Pizza, 489 US Highway 287, Lafayette.  They specialize in thin crust pies, have cocktails and a fine selection of beers, and they offer gluten free pies.