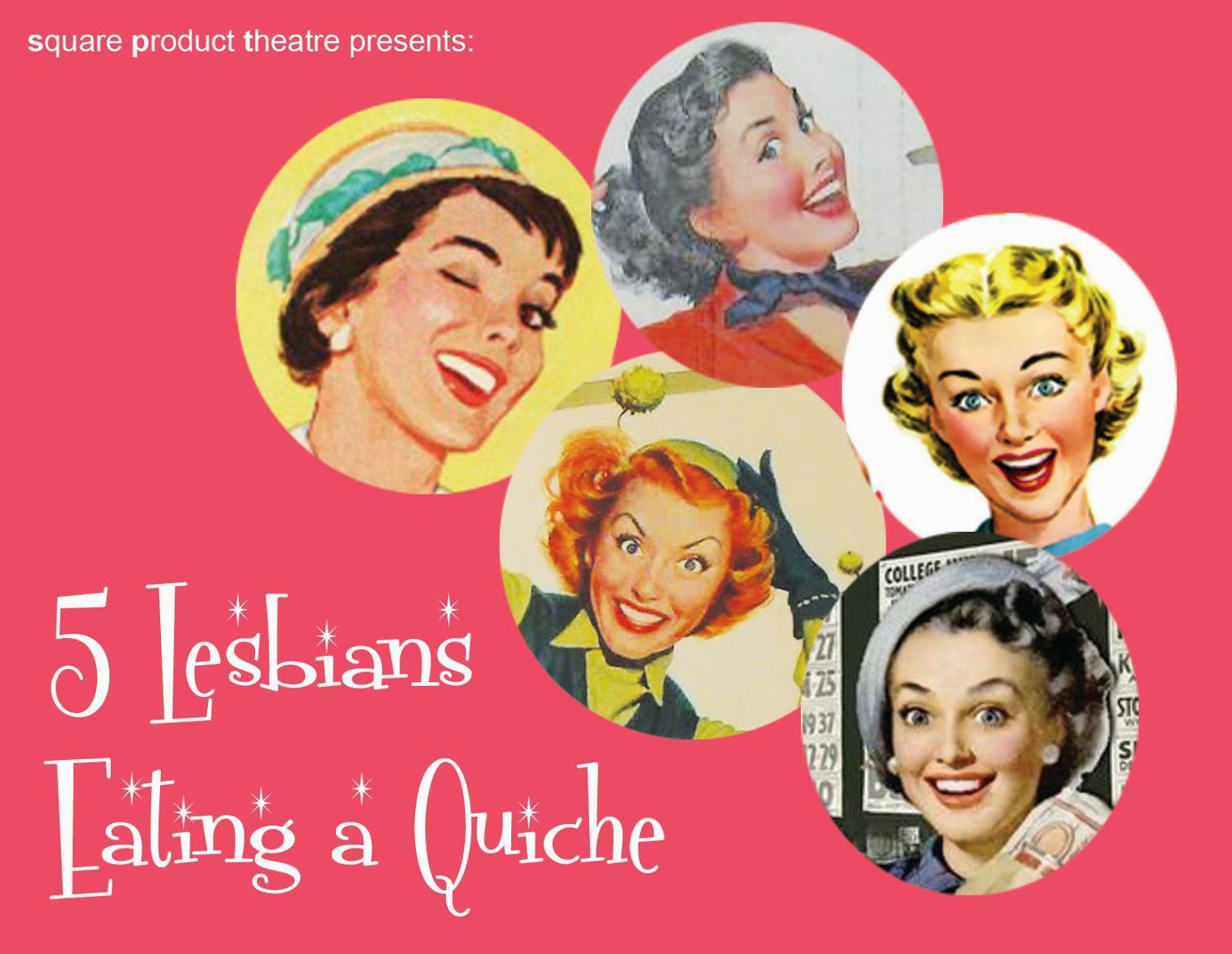 Playwrights:  Evan Linder & Andrew Hobgood
Company:  Square Product Theatre Company
Venue:  First Divine Science Church of Denver, 1400 Williams Street, Denver, CO 80218.
Running Time:  1 hours, 15 minutes (no intermission)
Date of Performance:  Friday, March 14, 2014
I saw Square Product's production of 5 Lesbians in 2012; it was a hoot.  Their current remount has nearly all of the original cast, and all of the same silly fun, witty dialog, and feminine charm of the original production.
5 Lesbians is set in 1956 at a meeting of the officers and members of The Susan B. Anthony Society for the Sisters of Gertrude Stein.  The membership demographics skew heavily towards widows.  There are no men in the crowd, by design.
It's the annual Quiche Contest meeting, and the anticipation of finding the perfect quiche made from the perfect egg with the perfect combination of vegetables is at a fever pitch.  (The perfect quiche cannot contain any meat.  You have to see the show to figure out why.)
As the thespians/lesbians open the contest by sampling the first quiche, you'll be treated to what has to be the best (and only) onstage demonstration of a food fetish I've ever seen.  Adjectives fail me here, so I'll just describe that scene as a memorable and "tasty" aphrodisiac.
As in the 2012 production, the ensemble is over the top, preening and posing at every opportunity.  They are truly "sisters" onstage, each playing off the other caricatures and characters.  Emily K. Harrison reprises her role as Dale, a lesbian with father issues who hasn't spoken to a man since she was three years old.  Her poignant story of her older sister's demise is one of the few tender moments in the script.  Harrison has the dramatic range and the comedic chops to be a character in the midst of four other caricatures.
Laurie Lynch (Vern) is the "Girl Scout" in the group.  She's out, she's butch, and she's full of bluster.  Lindsey Pierce (Wren) is feminine, dignified, and full of mischief.  Pierce's costume and hair were perfect for her role.  Michelle McHugh Moore (Lulie) is the President of the "Sisters," and she struggles constantly to maintain control of the chaos.
Jessica Robblee (Ginny) thinks she's straight, but discovers her hidden attraction to women.  Robblee has a crucial role in the cast; not only must she convincingly discover her true nature, but she also has a central role as an enthusiastic quiche lover.  She handles both of these delicate situations like an intelligent but innocent character would.  In the hands of a lesser actor, 5 Lesbians would not be nearly as entertaining.
Entertaining, in fact, is exactly how to describe 5 Lesbians Eating a Quiche.  The show is fun for all who are open to the adult theme.
I'm going to indulge myself now and get on my soap box.  Feel free to skip the rest of this review if you'd rather not hear the sermon.
I couldn't help but consider how much has changed since I saw 5 Lesbians in 2012.  There's a line in the show that hopefully states that in four years (1960), "we can probably get married."  Of course, that didn't happen.
Nevertheless, since the last Square Product version of 5 Lesbians, nine (9) states have legalized same sex marriage (bringing the total to 17 states).  Court rulings currently on appeal would make marriage equality the law in five more states (Utah, Oklahoma, Kentucky, Virginia, and Texas).   In fact, it appears that marriage equality may run the table in courts all over the country, including Colorado.
Marriage equality is on the way to becoming the rule instead of the exception.  Is that because of Square Product and other media and entertainment options that show gay and lesbian characters as our fun, charming friends and neighbors?  Probably not, but it would be naive to say the arts have no impact at all.  Square Product, in fact, can take credit for reminding us that lesbians are our sisters, our daughters, our friends and our neighbors.  Not only are they people we know...they are also the people we love.
Despite all the tragedies (9/11), disappointments (officially sanctioned torture), and hardships (Great Recession) we have known in the first decade of the 21st Century, marriage equality is a beacon of hope and inspiration.  Art, film, and theater, including Square Product, are part of that beacon.
There were many couples in the audience who came to see a show that they can relate to, that entertains them, and that doesn't marginalize them.  Thank you, Square Product, for giving dignity and respect to all in your audience.
As far as I know, there is no local "lesbian" theater company, catering to primarily to that niche audience.  Perhaps we need one.  Perhaps Square Product should be that company.
Playing to a small slice of the potential audience is risky, but the rewards are huge.  I know a lot of theater fans who would not hesitate to see good theater, no matter the niche.  Consider PHAMALY.  It's focused on disability issues, but their high quality productions attract diverse audiences and show disabled individuals as performers with amazing talent.
The Square Product mission statement includes "change":
"The mission of square product theatre is to create and collaborate on original, honest and innovative works of theatre with local and national artists...(W)e dedicate ourselves fully to the beauty of simplicity and the importance of theatre and performance as a vehicle for communication, relation and change."
If I were writing this mission statement, it would be shorter and simpler.  But since I'm not writing it, I'll just suggest one revision.  Perhaps it's time to revise the last line to "equality and change."

NOTES:
The venue is a church basement, and given the setting for the play, it's a very appropriate location.  There was a church dinner event going on at the same time as the play.  While some may see an incongruity between church activities and dramatic lesbians, it was comforting to see each group's acceptance of the other.
Arrive early enough to find a parking place.  There is limited church activity parking available on the north side of the building.  Otherwise, expect an extensive tour of the nearby blocks searching for street parking.
This show closes on March 22, 2014.
This show is suitable for adults of all ages.

Pre or post show dining suggestion:
This theater is sandwiched between Cheesman Park and East Colfax.  In other words, it's not exactly in the middle of a lot of great restaurants.
I traveled from Colorado Springs, stopping at The Rockyard American Grill & Brewing Company in Castle Rock.  Expect very good craft beers and typical brewpub grub.  Try the Firebird sandwich; it's one of the best buffalo chicken sandwiches I've found.
TICKETS HERE.
Photo Credits:  Square Product Theatre Company.